To say "I love you" one must first be able to say the "I".....
Am I for her?
By:~dae_meen~
I WOKE UP in a dark and black place. All I see is night, and darkness all around. Where am I?
“Tap tap tap.”
Suddenly I heard footsteps, coming to me.
“Tap tap tap.”
I heard them again, “Whose footsteps are these? Who is coming to me?” I asked my self as my heart beat pounded wildly by the second.
“Tap tap tap.”
I heard the same footsteps, this time clearer and coming nearer. Then it stopped and everything went silent, silent as the dead.
Then I saw a light, a very bright light the shape of a human being standing in front of me about 3 meters in distance. It was a blurred image at first, but it became clearer by the moment like a lens of a camera closing up on an image. The image became clearer and clearer. An image of a woman, a beautiful woman fully dressed with a hijab on emerged in front of me.
Stunned by the moment; I did not know what to do. Paralyzed. I can feel my beating heart pounded rapidly. “Who is this woman? Who is she?” I asked to myself.
The woman in front of me smiled then she said “Assalamualaikum Akhi…”
*********************************
“Mama…I want to tell you something…Do you have 5 minutes?” said Ameen as he sat beside his mother.
His mother was typing something on her Toshiba Elite. She then stopped typing, took of her glasses and placed it on the living room table. She glanced at his son, stared at his 21 year old son.
“Hah…What is it this time?” Dr Salbiah answered back.
“Do you still remember that day you told me, there’s this wonderful Muslimah who you said was suitable for me?” He seemed a bit nervous, but “Follow your heart, and you will see the light.”
Dr. Salbiah smiled, a very deep smile. “What about it?” She replied as if she didn’t care the feelings behind his son’s words.
“Well, I’ve thought it through mom, but…” He didn’t finish his words.
“But what son?” Dr Salbiah eagerly wanted to know.
In a very sad tone, nearly cried, Ameen said “But…It’s not easy to YES and it’s actually hard to say NO…”
Both of them went silent. Then his mother voiced out “What was the answer to your ISTIKHARAH?”
“I had this dream, but I’m not so sure what is best for me” said Ameen, confused.
Then Dr. Salbiah wrote something in a piece of paper and gave it to him. 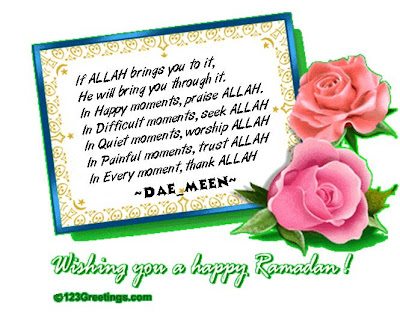 “Today is the 10th of Ramadhan right? Ask for Allah’s forgiveness every night. Ask Allah ‘Please protect me with your might’, regarding you Istikharah, InsyaALLAH, you will get it right” wonderful words came out from his mother.
“Insyallah mama, I’ll try my best, I will have the answer in this holy month” smiled Ameen.
**************************************
Ameen woke up from sleep. It was 3 O’clock in the morning. His body was sweating.
“Who is that woman in my dream? Is she the one my mother was saying about?” Ameen said to himself, his dream was too clear.
“Yeah, she was shining in light...” Ameen flashed back his dream.
“O yeah, she gave me Salam. Waalaikumussalam..” Ameen answered her salam back.
Ameeen smiled remembering his wonderful dream just now, but then his eyes were brimming with tears and tiny droplets running trough his cheeks slowly. Why is he crying? Why is he crying when he was just gifted with a very wonderful dream?
Ameen got up from his bed; he rushed to get ready for prayer, as if he were on his way to meet his loved one. Ameen merged with his prayer, giving all of his attention to Him.
Ameen silently beseeched his CREATOR after performing solah Taubah: “O ALLAH, what was the dream just now? Are you showing me that she is the one? Will she be the one for me?” Ameen paused because he was crying so deeply.
Then he continued “She seemed to be so perfect, she is so beautiful and so well-dressed as a Muslimah. But O ALLAH! Am I for her? With the position that I’m in, in your eyes, is she meant for me? Am I, an awful person meant for her?”
“O AL-MUHAIMIN!! Once a man came to Al-Hasan ibn Ali and said: “I have a daughter. To whom should I marry her?” He answered: ‘Marry her to a man who has taqwa. If he loves her he will be generous to her and if he does not like her he will still treat her well.’ Will I be generous to her? Will I treat her well?
Ameen begged and pleads to his CREATOR as if a drowning person wanting to be saved “O ALLAH!! I am afraid. I am afraid if I am a wrong-doer. Allah will be angry to me because I will be responsible for causing her to lose her Deen. O ALLAH!!! I am fearful that I haven’t devoted my life and death only for YOU as what you said in Surah Al-An’am: 162 ‘My prayer and my service of sacrifice, my life and my death are for Allah alone, the Cherisher of all the worlds.’
“O ALLAH. If it is true that I am for her, then show me a path where I can know her. O ALLAH!! Guide me to your LIGHT!!”
As he finished his sharing moment with his CREATOR, he read some verses of the Quran. It was 4 o’clock in the morning. He climbed back to bed not to sleep but to thought once more about the two paths open to him--one leading to happiness in this temporary life; the other ending in spiritual happiness in eternal life. He was well-aware that true peace could only be found by remaining a faithful Muslim and adhering to Islamic principles, thus avoiding any deviation from Islam.
The first path would take him to a world of luxury filled with misleading comforts and illusionary happiness. The other path would guide him along life’s road. By following this path, he would savor victory and be crowned with the laurel of firm belief and determination. Since he was gifted with true understandings as a Muslim, as natural, the misleading road will be rejected, but still, Ameen sometimes felt weak in the face of threats and temptation.
He then felt tired and his eyes were also tiring. The question on “Who is she?” not important to him right now. The question that is in his mind is that "Am I 4 her??"
Out of exhaustion, Ameen doze off together with that question that keeps on playing in his mind without pausing. “Is this the answer to my ISTIKARAH? Will this end in peace? Give me an answer, please.”
Posted by Amin Misran at 3:57 AM

"but to thought once" or should it be "but to think once more"?

so who was the muslimah?
waAllahualam.

To Nurullah: Jazakallah Mat...After you...

To Akak: Tak perasan ada typo...Boring2 semalam tetibe nak tulis...
Was the dream real? What do you think?

nice story of true story...May Allah blessed u and all the day

May ALLAH give you da answer, my dear brother...

May whoever meant for u will help u in da'wah n tarbiyah, building a baitu dakwah, give born to mujahid and mujahidah..not easy huh?? keep praying..